THE BIDLAKE MEMORIAL PRIZE
F.T.Bidlake was a record breaking cyclist of the late 19th century who became a leading cycling administrator. The annual Bidlake Memorial Prize, was instituted in his memory.
Awarded in recognition for the most outstanding performance or contribution to cycling. Marguerite's was awarded her plaque 1940 in recognition of her Land's End to John o'Groats and 1,000 mile record ride. This was the most prestigious accolade in cycling, its alumni reads like the who's who of British cycling. 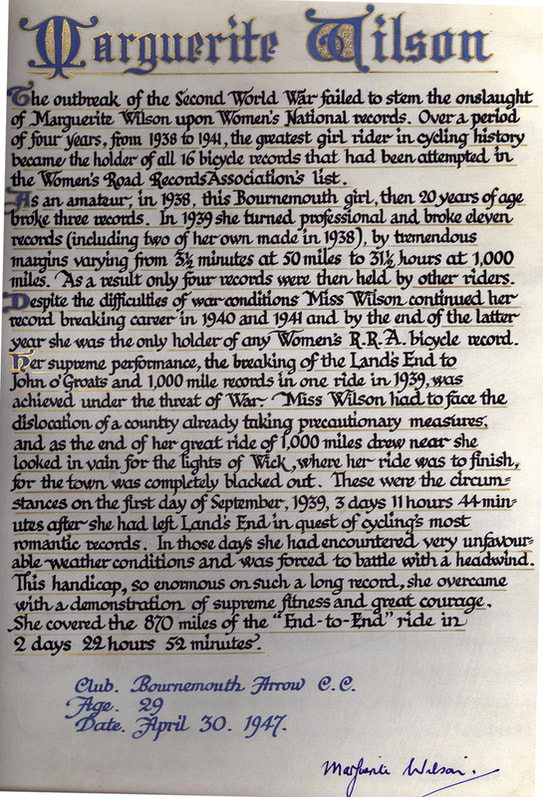 THE GOLDEN BOOK OF CYCLING
'The outbreak of the Second World Warfailed to stem the onslaught of Marguerite Wilson upon the Women's National records. Over a period of four years,from 1938 to 1941, the greatest girl rider in history became the holder of all 16 bicycle records that had been attempted in the Women's Road Records association's list.
As an amateur, in 1938, the Bournemouth girl, the 20 years of age broke three records. In 1939 she turned professional and broke eleven records by tremendous margins varying from 3 1/2 minutes at 50 miles to 31 1/2 hours at 1,000 miles. as a result only four records were then held by other riders. despite the difficulties of Wartime conditions Miss Wilson continued her record breaking career in 1940 and 1941 and by the end of the latter year she was the only holder of any Women's R.R.A. bicycle record.
Her supreme performance, the breaking of the Land's End to John o'Groats and 1,000 mile records in one ride in 1939, was achieved  under the threat of war. Miss Wilson had to face the dislocation of a country already taking precautionary measures, and at the end of her great ride of 1,000 miles drew near she looked in vain for the lights of Wick, where her ride was to finish, for the town was completely blacked out. These were the circumstances on the first day of September, 1939, 3 days 11 hours 44 minutes after she had left from Land's End in quest of cycling's most romantic records. In those days she has encountered very unfavourable weather conditions and was forced to battle with a headwind. This handicap, so enormous on such a long record, she overcame with a demonstration of supreme fitness and great courage. she covered the 870 miles of the 'End-to-End' ride in 2 days 22 hours 52 minutes'. 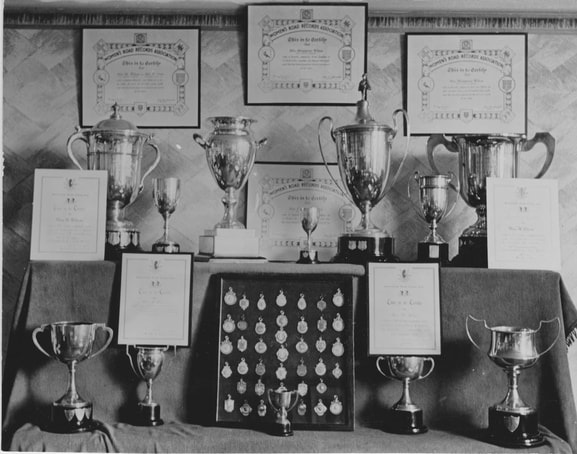 WOMEN'S ROAD RECORDS ASSOCIATION TROPHYS
Marguerite acquired an impressive hoard of silverware. For each record she was awarded a Certificate and a Trophy. Each WRRA trophy was sponsored, usually by a cycling manufacturer. For instance the 'Pompy' (London to Portsmouth and back) trophy (on right of the adjacent photo) was sponsored by Raleigh Bicycles and a statuette of Sir Walter Raleigh stood atop of the lid. In the 1950s all her records and trophies were claimed by the greatest rider of the 1950s, Eileen Sheridan.