What a beautiful book – physically it is such a lovely publication, and it has been put together so well. I love the collection of photos, posters, news-cuttings etc. that you have assembled and presented so expertly. The inclusion of many quotes from Marguerite and some of her prose writing make for a lovely record of her as a rounded person. One of the loveliest things about the book is the way that Marguerite’s sense of health, fun and beauty just beams out of every photograph.

Bernie Brown - Bristol Road Club.
I have just finished reading your excellent biography on the life of Marguerite Wilson. As with all good biographies  it is a superb piece of social history. I never met her myself, but  I do know several people who had met her and had the the highest opinion of her both as a person and a top class racing cyclist. I first joined the Bristol Road Club in 1954, when club life was still very much the same as described in your book. Over a hundred miles and more on the Sunday club run was our average and during the week the miles kept on building because we went everywhere on our bikes. On one occasion I bunked off after lunch and missed club tea and was told off the following week and told never to do such a thing again.
During the 1960s things began to change and evolve into the very competitive sport which it is today, but much of the fun and spirit of adventure had gone, I think never to return.
This is what shines through in your book. That spirit of excitement and adventure of a past age. Few people owned a motorcycle or car, in the 1930s so to achieve what they did then was magnificent. MW was in the forefront of this and deserves great credit for pushing the sport forward.
The history of flying boats and her work with B.O. A.C  is just as interesting ( I can remember them as a boy).
Thanks for writing and producing an important piece of history.

Isabel Best - Writer, www.isabelbest.com
I just wanted to thank you for the Marguerite Wilson book and wanted to let you know how much I am enjoying reading it. It is currently crammed with post-it notes as I keep on finding fascinating details and wonderful anecdotes. I love Ethel Brambleby’s chapter on her, you really get a sense of what a talented rider she was, and also what an endearing personality she had too. She is definitely one of my ‘favourites’ among the women I’m writing about.  Your research is also really impressive, the details are brilliant and I love reading Marguerite’s own writing, and the other accounts from people of the time that you have found. I’m finding the book very useful also for giving a very vivid sense of what racing was like at the time.
Gerry Kemp
I would like to record my sincere thanks for the gift of this superb presentation of Marguerite Wilson’s cycling career.
I first became interested with Marguerite’s cycling in 1946 when my cycling interest began. In those days the weekly journals ‘Cycling’ and ‘Bicycle' printed many articles about Marguerite’s successes pre-war which I read with interest. The one that stands-out is when Marguerite competed in the Land’s End to John o’Groats in record time finishing on the day war was declared and the black-out regulations were already in force - remarkable!
I would like to congratulate you for including so much detail regarding other star riders at the time. They all contributed to woman’s cycling as we know it today!
Once again many thanks, a treasure indeed.
Eileen Sheridan - Famous post-war record breaking cyclist.
​Congratulations! on your wonderful book of Marguerite - 1st Star of Women's Cycle Racing.
Kate McRae
I had the great fortune to see your book about Marguerite Wilson the other day. It is a great privilege to have a snapshot of my father's life included and fascinating to read more about the cycling scene I grew up immersed in. I particularly liked the format of the book. Very visual and engaging. What an important project.  I hope you will pursue the possibility of publishing. (December 2015).

John Taylor - Secretary, Twenty-four Hour Fellowship.
Just over two years ago I received a request from Dr William Wilson in connection with his Aunt's WRRA road records and racing career. He asked if I had any good photos or record descriptions I could help him with. His Aunt was the famous Marguerite Wilson, and he was about to write a book about her. William guessed from what his family had told him, that she was someone special, and way ahead of her time in terms of sporting achievement. I think he'd either seen an advert, or had been told about my first book 'The End to End Story,' covering all the Land's End to John o'Groats and 1,000 mile record breakers from the turn of the 20th century, and soon he was ploughing through it.
I also managed to convey what an important part she played in making women's cycle racing attractive, not only to other women cyclists, but to the general public, especially when she turned professional for Hercules just before WW2, and later with Claud Butler.
The display of photos from his Aunt's albums and scrap books convey cycling club life exactly as it was in the 1930s and 40s, and photos taken during her record breaking spree are so atmospheric. When William contacted me, I told him how, as a young teenager, the account of his aunt's End to End and 1,000 mile record, finishing in the blackout on the eve of WW2, had conjured up a vivid picture in my mind. The story of her amazing records were 'folklore' amongst club riders, as were Eileen Sheridan's ten years later, and they were passed down to me by other record breakers. The excitement, the danger, and the fact that she was, and still is, the youngest person at 21 yrs-of age to break those records. Dr Wilson has done his aunt proud, and I'm glad to have been of assistance to him. (Published in the Twenty-Four Hour Fellowship, Journal 115, Autumn 2015).
Alexander von Tutschek - Connoisseur and leading bicycle collector.
Hello again, since last responding both my wife Sharron and I have read your superb book. We both found it engrossing and have come away even greater admirers of your famous ancestor. We are prolific buyers and readers of books ..........and DO NOT keep all of them. This is a KEEPER..........the best compliment I can pass.
Andrew Brooker - www.photo-restoration-arts.co.uk
I've been reading the book and it's fascinating and very professional - none of that gauche egocentrism of so many self-published books.  Marguerite deserves to be much better known: she was obviously a great professional athlete - if she'd been active 40 years later she'd have been commenting on the Tour de France and all the other races on TV now.  As you say, another victim of the War! 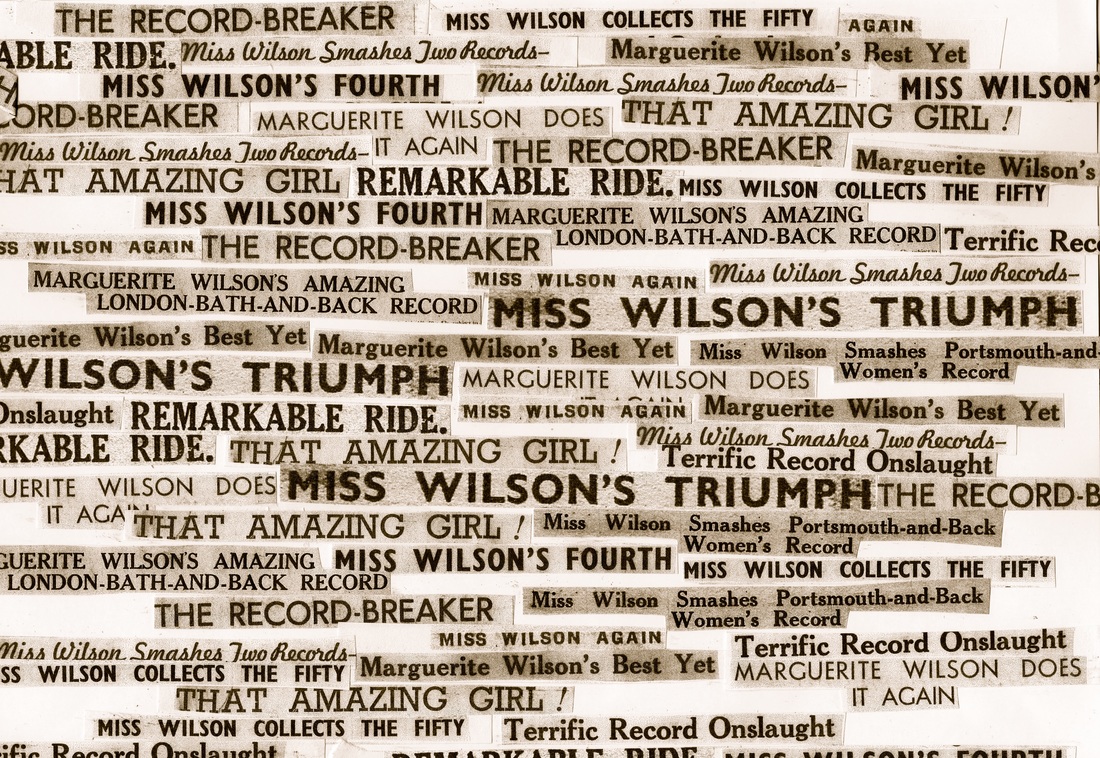